Catnip grows wild here in central Minnesota as I’m sure it does in many places. We make a popular catnip vinegar so one of my duties this morning was to forage for some. As I weed and prune around the garden and orchard, I mentally map where I can find it when I need it. This time of year, most has already gone to flowers, with the leaves less than prime. But catnip continues to come up through the summer so I knew I’d find some young enough, maybe at the teenage stage. 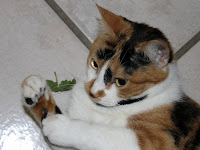 I collected a bucket and my new long-nose clippers. As I roamed, I clipped spent day lilies and hosta flowers as well as the occasional thistle. I checked the milkweeds for caterpillars but didn’t see many chewed leaves. I was pleased to see a monarch butterfly flit across the ponds. I hope it was planning to lay eggs on some of the milkweed we’ve saved for that purpose.
Monarch eggs have suffered (if an egg can suffer) the predation by a variety of insects and protozoan parasites, seemingly reducing their numbers in recent years. About 20 years ago, we were concerned whether the monarchs would reproduce well in this area. We hadn’t seen many through that July but by the end of August we found many chrysalides hanging from the siding, statuary and lawn furniture.
This year, and it’s already the end of August, I haven’t seen a single chrysalis, not even one caterpillar. We have plenty of milkweeds but few butterflies.
My wandering across the yard in search of catnip led me to the best find near the chicken coop. The poor hens have been cooped up since they took a liking to strawberries and tomatoes. They even nibbled the leaves off the pepper plants when we set them out in the straw bale garden. We tried to fence them in with a makeshift fence. Though chickens aren’t high on the intelligence scale, they quickly found a way through. So, I bring them tasty morsels like melon rinds and the remnants of our meals of corn on the cob.
The catnip was growing at the base of a huge basswood tree next to the coop. Scattered along with it was a healthy stand of deadly nightshade. That emphasizes the importance of knowing not only the plants that are useful but also those that grow alongside them.
As I was clipping the catnip, I saw a flash of light. I thought I was seeing things until I heard a distant roll of thunder. We desperately need rain and it is in the forecast for today. The thunder was separated from the flash by long enough that I knew the lightning wasn’t close. But, flashes continued to come and each time the thunder was more immediate. I suddenly felt extremely vulnerable when several flashes were closely followed by ear-splitting thunder. There I stood, under a huge tree with a metal clipper with rubber handles and a ten-inch blade. 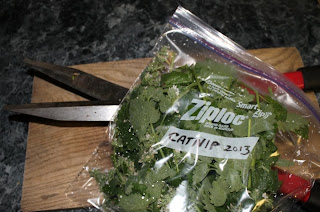 What to do? I waited until the next flash and boom and then high-tailed it for the house, holding the clipper blade downward as if it would deflect the electrical charge if struck. Ron saw me coming and thought it was funny, I guess, though he hasn’t seen me run in quite a while. I didn’t linger out in the open but headed through the vinegary door while Ron stood outside looking upward. Well, he didn’t get struck, we got some rain, and now it’s moved on.

I washed the catnip and bagged it for the freezer. Our calico cat, Pandora, was enchanted by the bag. I gave her a stray leaf and she loved it, batting, tossing and nibbling on it. Javiar, the Maine Coon cat that belongs to our son, showed no interest at all. Our big orange tomcat, Jed, came late to the scene and ate the last bits. Catnip is a stimulant for cats so I suppose we’ll have them chasing each other through the house. It has a calming effect on humans so if you decide to try some of our catnip vinegar on your salad, you’ll enjoy the flavor and then calmly go about the rest of your day.

Posted by Nancy Packard Leasman at 8:07 AM No comments: 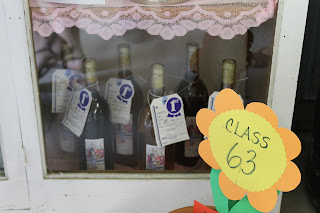 Ron has always said that it takes good wine to make good vinegar. He entered six Leatherwood wines in the Todd County Fair and was awarded six first-place ribbons.
Posted by Nancy Packard Leasman at 1:50 PM No comments:

We’d like to think that the growing season is on its way. Ron optimistically pruned the apple trees yesterday. Today we have 6 inches of new snow. We know it can’t last, but everyone in the area feels the pain of one more day of winter’s blast. 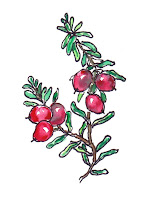 The vinegary has been bustling with wine-making students. Have I mentioned that Ron gives classes for individuals and small groups? Working with wine kits, home grown or purchased fruit, participants learn the science of wine-making and set up their own batch in the first class. They come back to rack-off the wine from the primary fermenters into carboys and to monitor the fermentation process. Then a few weeks later, they come back again to bottle their wine and take it home. We have everything needed for making wine: all the equipment, materials and ingredients; even the bottles, corks and corkers. Some groups come back again and again for a fun time out and a good product to take home. Email Ron for more information.

I’ve mentioned in a couple of previous posts about the new labels for our vinegar bottles. I’ve painted 11 fruit images to identify the fruit flavors of the vinegars. You can see all of them at Whimsy Home Designs. Those same images also help identify the kind of vinegar used in some of our new products: Rhubarb Vinegar Soap, Raspberry Vinegar Soap, Cranberry Vinegar Lip Whip and Raspberry Vinegar Skin Cream. For now, you can see these products on the Whimsy Home Designs website. Soon, they’ll be added to a new Leatherwood Vinegary web store.


Another recent development: the folks at Smude’s Sunflower Oil have put together a catalog of locally produced items for school fundraisers. The catalog looks great and it’s an absolutely terrific idea to offer high quality local products when the kids need to generate funds for their activities. Learn more on their website.


Posted by Nancy Packard Leasman at 1:03 PM No comments: 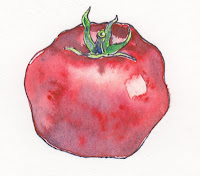 Tomato wine vinegar was a successful experiment.
Ron hand selected the tomatoes and in the usual process, which lasts at least a couple of months, turned them into tomato wine. I wouldn't say it was gourmet quality, though like many wines, it maybe would have become an acquired taste. But Ron didn't leave it at the wine stage. He put the vinegar starter in and set it up for a slow wait to see how tomato wine tasted as vinegar.
Tomato wine vinegar is pretty good. It was ready (has to be at least 5% acidity) about the time we had a good supply of basil in the herb garden. Of course basil and tomatoes are classic pairings, like dill and pickles, like Ozzie and Harriet, like Ben and Jerry. Well, something like that anyway. With the thick row of prime-for-picking basil, Ron immediately infused the tomato vinegar with lots of fresh basil. I say "immediately" but that part of the process takes another two weeks.
When the basil/tomato vinegar was ready, we tasted and were blown away by the intense flavors. We immediately (not after two weeks) knew this would be special on anything with tomatoes: fresh tomato salsa, on salads, sprinkled on pizza, simmered into spaghetti sauce.
The Leatherwood Basil in Tomato Wine Vinegar has been a hit and now, in 2013, it deserves a new label: a fresh beautiful watercolor tomato.
Some have asked if we sell just the tomato wine vinegar. We haven't yet since all of it has been infused with basil. We need a lot to meet the demand. But, maybe, if the tomato crop is good this year...we'll see.

Posted by Nancy Packard Leasman at 8:35 AM No comments: 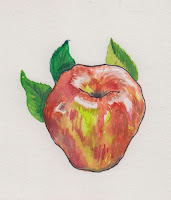 Leatherwood Apple Wine Vinegar was one of the first varieties we made and is still a popular choice.
The new label design shows a generic apple. Many different kinds of apples go into the Leatherwood wine that becomes Leatherwood Vinegar. The early harvest MacIntosh apples are pressed in August making an early wine and a resultant vinegar that may be more true to one variety than later apples that are mixed together. But, we don't make any distinction on different apple varieties once they have become vinegar.
Leatherwood Apple Wine Vinegar is a little different from apple cider vinegar. Cider is apple juice that has fermented to a low level alcohol. It is then converted to vinegar. We make wine from the juice rather than cider. It is then converted to vinegar in a slow natural process. Some of the Leatherwood Apple Wine Vinegar is infused with dill to make our very popular Dill in Apple Wine Vinegar. This is wonderful to use whenever you like to add the flavor of dill. Try it in potato salad, cole slaw and marinades. We like it on baked or broiled fish.

See more of Nancy Leasman's artwork, in the same style as the Leatherwood Vinegary labels, at www.whimsyhomedesigns.homestead.com.
Posted by Nancy Packard Leasman at 11:38 AM No comments:

The beginning of the calendar year is always a good time for planning, setting goals, and even achieving some of those goals. Here at Leatherwood, we set a winter goal of designing new labels for the vinegar bottles. Each fruit flavor will have its own design. At just a glance, shoppers will see the difference and know what a bottle holds.
We'd like to introduce each new design here. Here's the first: CHERRY. 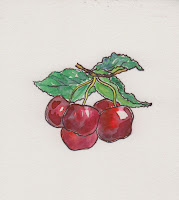 Our CHERRY vinegar has proven so popular that it deserves the distinction of being the first one to be introduced with the new label. As you may have read in a previous post or perhaps learned on a tour here at the vinegary, folks have experienced pain relief from arthritis and gout by taking daily sips of this delightful vinegar. We like it for our daily sips, too. It's also great on salads, in marinades and stir fries.
Leatherwood CHERRY vinegar is a beautiful ruby red vinegar. It looks pretty in its slender glass bottle with a cork and beeswax seal and its fancy new label. We also bottle some in the smaller 50 ml bottles to be packaged in our Sampler Packs.
Posted by Nancy Packard Leasman at 9:18 AM No comments: