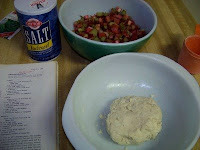 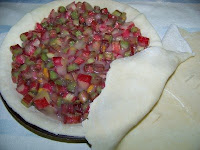 I may have robbed the rhubarb cradle with the stalks only four to eight inches high. But, rhubarb isn't fussy that way since it's useable if it's above the ground. No need to wait for it to ripen, turn color or the seeds (what seeds?) to turn brown. I gathered a small amount for a small pie. I cut the leaves and left them in the rhubarb patch but left the root end on to trim carefully once they were washed. I cut the 3/8" to 1/2" diameter stalks into 1/2 inch pieces and then made the crust.

With 3 1/2 cups of rhubarb, I made an 8 inch pie. Below is the recipe for the filling, and yes, I did put vinegar in it: 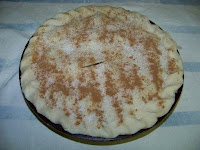 The phone rang while I was in the middle of mixing the filling. Hilary had news of her last day of classes at MCAD and her request for us to come get her stuff the next day. The summer job issue is still up in the air so she may, or may not, be home for the summer.

While I was talking with her, Ron stopped home from his trip to Alexandria to get building materials for the potato farm and some for the new wooden stairs to the loft above his wood shop. He poked his head in the door to tell me what he was up to, but Mr. Pie Lover didn't notice what I was maki 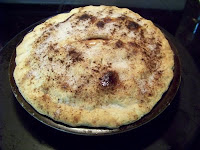 The pie is in the oven and the aroma is beginning to waft through the house. Ron will notice when he stops home for lunch. But no sampling until dinner.
Ta da! The first pie of the season!
Posted by Nancy Packard Leasman at 8:45 AM No comments:

It's a rainy day, washing off more of the winter dirt and making the grass grow. The herbs are poking up through the leaves that still cover their winter bed. Tarragon, oregano and the first dark purple leaves of the anise hyssop have made their appearnace. The lovage sprouts, too, one of the first herbs to offer up its fresh celery flavor, are four to six inches high. The rhubarb is nearly tall enough for a first harvest. It's wonderful to once again go outside to find food and flavors to spice up the everyday menu.

It might be premature to declare the garlic experiment a success but after raking off the layer of leaf insulation from the garlic bed last week, I can see that the green spears are poking up. The shallots are coming up, too.

I've spread many of last year's leaves on the garden with the intent of mowing them into leaf mulch before tilling them in. Ron tried mowing them but that was on a windy day, as many of them have been lately, and the wind threatened to spread them back across the lawn. He mowed some of the sage, and the thyme, a little closer to ground level than I would have liked, but we'll see in just a few more days if that was wise or foolish. The last time I did that to the sage I was afraid I had killed it; but it came up and flourished.

I planted seeds in flats three weeks ago. The necked pumpkins are already of a size to plant out in the garden but it's too soon. They have amazing root systems. The peppers and tomatoes seems to be off to a slow start but are getting their true leaves. The brussel sprouts and cabbage are looking good as are the two melon varieties. The family salsa pepper that we've saved for several years are growing again as are little hot peppers that Laura received from a neighbor at her apartment in St. Paul. I had hoped to have proper greenhouse shelves and a lighting system set up this year. It didn't happen but have rigged an extra light to give the plants a boost on these gray days.

Recent tours have gone well in spite of relatively little to see in the yard and garden. We hope they'll come back and visit again as the growing season progresses.
Posted by Nancy Packard Leasman at 11:06 AM No comments:

Thawing out and greening up

The ice is finally gone from the koi ponds and though Ron found frost only four inches down in the garden, some of the herbs are sending up shoots. Tender shoots of tarragon and oregano are up as well as rosy rhubarb whorls. We're watching for the lovage and when it's up, things will move quickly.

We had a great time talking about vinegar at the Women's Wellness event at Arrowwood, the West Ottertail Horticultural Day and the K.C.'s monthly dinner. Savannah used her computer skills to make a powerpoint presentation and it debuted at the Arrowwood event.

The first tour bus of the season ( a Girltime Getaway group) zipped right on by on Saturday. Mapquest gives some odd directions for finding us. The tour coordinator called to clarify directions and I guess the four miles from Long Prairie went quickly with all the girl chatter going on. The bus turned around and came back and we had a nice visit with 40 ladies on a mystery tour. It was a chilly day so Ron and I hopped on the bus and chatted about our enterprise so we could abbreviate the outdoor portion of the tour. In another two weeks the gardens and orchard will be a different place than the brown leaf-covered area that it is now. The vinegary is always cozy and inviting and Ron made a fire in the wood stove in the retail shop so no one was cold for very long.

We have two more tours scheduled in the next two weeks so we can officially say the tourist season is up and running.
Posted by Nancy Packard Leasman at 7:10 AM No comments: